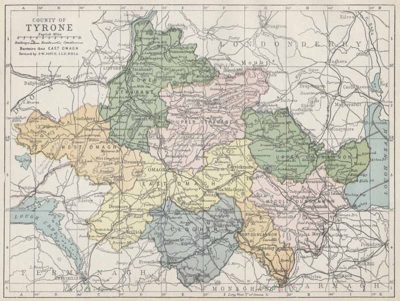 Tyrone covers some 3,155 km2, making it second in size only to Donegal in all of Ulster.  Situated at the heart of the province, it has land boundaries with Counties Armagh, Derry, Monaghan, Fermanagh and Donegal, and marches Antrim to the east along Lough Neagh. Only Cavan and Down do not adjoin it. The population in 2011 was approximately 178,000, about 20,000 less than it was in 1901. The chief mountains are the Sperrins, forming part of the boundary with Derry, with the highest peak (Sawel, 678m) partly in both counties. The main rivers are the Blackwater, Glenelly, Mourne, Strule and Camowen, while Omagh, Dungannon, Cookstown, Strabane and Fintona are the chief towns.