The major towns of the diocese are Mallow, Fermoy, Midleton, Cobh and Youghal. Cork City is situated 32km from the town of Mallow.   County Cork consists of many mountainous areas. Slieve Miskish and Caha Mountains are close to the Beara Peninsula.  The Ballyhoura mountains are bordering with Limerick and the Shehy mountains are bordering with Kerry. The Galtees are the main inland mountain range and are close to Counties Tipperary, Limerick and Cork.  The main mountainous areas around Mallow and North Cork are Derrynasaggart, Boggeragh and Mullaghareirk mountains. 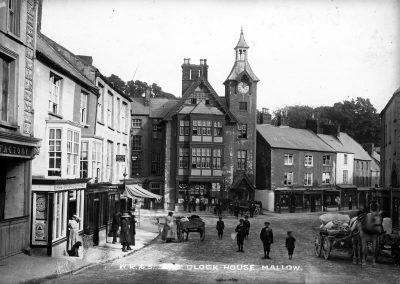 Mallow at the turn of the nineteenth century

Mallow is situated on the River Blackwater (An Abhainn Mhor – ‘The Big River’). The river rises in the Mullaghareirk mountains in Co. Kerry and flows east through the towns of Mallow and Fermoy.  In Co. Waterford it flows through Lismore and south at Cappoquin before it flows into the Celtic Sea at Youghal Harbour. The river Blackwater is famous for fishing and angling.

Mallow Railway Station is the main junction for trains from Tralee in Kerry, to Cork, Limerick and Dublin.  The Mallow Railway Station opened on 17 March 1849 by the Great Southern and Western Railway. The viaduct in Mallow called the ‘Ten Arch Bridge’ was bombed and destroyed during the Irish Civil War which cut off Cork city to Dublin. A temporary station on the South side operated to Cork city and a taxi service brought passengers to the North side of Mallow town for the trains to Dublin while the ‘Ten Arch Bridge’ was being reconstructed. A stone taken from this bridge was unveiled in Glasnevin in 2014 as a memorial to Thomas Davis. The stone is situated close to Daniel O’Connell’s Tower and resting places of other Irish Patriots.