The records we hold are:

Roman Catholic:  Baptisms and Marriages for the Diocese of Cloyne.

Church of Ireland:  Baptisms, Marriages and Death Records for North Cork Area only.

Some Graveyard Inscriptions and school records.

Susanna Russell manages all enquiries and research facilities in our Heritage Centre. She is an expert on family research and has vast experience in local lore and history.

Anne Scully plays an integral role in the administration of the Heritage Centre.  She has detailed experience and knowledge of the wider diocesan area.

The Centre receives visiting clients from all over the world.  It enhances tourism in our area by providing a public and social service. We have expert knowledge on family research and have vast experience of local lore and history and a wealth of experience from which to draw. Most of our visiting clients are on holiday from the U.S.A., Australia, Canada and UK. Many visitors would have been in postal, email, or telephone communication with the Heritage Centre prior to visiting Ireland. We advise all clients to have gathered as much research information as possible on their ancestor prior to visiting, this way they can visit the original homeland of their ancestors making their trip so much more worthwhile.

Tom and Susan Crean from New York while celebrating their fortieth wedding anniversary in Ireland, renewed their marriage vows in Dromahane Church, the parish where Tom’s father was baptised in the early nineteen hundreds and where his grandparents were married. It was their first trip to Ireland and while they were here, Tom met several first cousins he never knew he had.

Research was carried out for the wife of well-known actor Billy Crystal – her ancestors came from Mallow.

Research was also carried out for Vincent O’Brien, famous Irish horse trainer, (now deceased) at the request of his wife Jacqueline O’Brien who was writing a book on her husband’s life. Vincent’s ancestors came from the Churchtown/Liscarroll area of Co. Cork.

Fr. Robert Forde, C.C., Mallow (1922-2012) set up Mallow Heritage Centre. He researched and located the family records of Thomas P. ‘Tip’ O’Neill, Jr., (1912-1994), former Speaker of the United States House of Representatives), in Mallow Parish Registers and was instrumental in bringing him to Mallow. 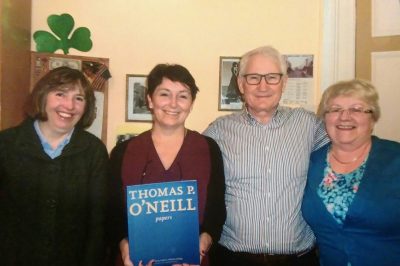 At Boston College, the main research library, the ‘Thomas P. O’Neill Jr.’ library, is located in the centre of the main campus adjoining the O’Neill Plaza. Christian Dupont, Director of the John J. Burns Library for rare books and archives at Boston College, which holds Speaker O’Neill’s archives, visited the Mallow Heritage Centre in July 2016. 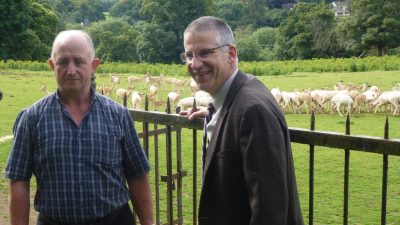 Pictured are Ned Murphy who feeds the white fallow deer at Mallow Castle and Christian Dupont.  The herd, one of only two in Europe, were descended from deer that were given to the Castle by Queen Elizabeth I.

‘Mallow Heritage did outstanding work in researching my family.  Its representative was very cooperative and a pleasure to deal with.  The information she generated for me encouraged me to take my five children and their spouses, my brother, sister and their families to Ireland.  We all wanted to place our feet on the ground that our ancestors walked on.  My eldest son enjoyed his trip so much that he is returning and taking fifteen of his friends in September 2000 to play golf.  As a result of my trip, a number of friends have used the services of Mallow Heritage Centre.  Today, two groups of 10 and 18 people respectively have gone to Ireland as a result of information supplied to them by Mallow Heritage Centre’.

‘I have visited several heritage centres and find the Mallow Centre to be the most personable and efficient.  You are always welcomed to the centre by their professionalism and knowledgeable staff’.

We are open Monday to Friday

Closed on Public and Church Holidays.