Tipperary is the sixth largest of the 32 counties by area and the 12th largest by population. It is the third largest of Munster’s 6 counties by size and the third largest by population. It is also the largest landlocked county in Ireland. The region is part of the central plain of Ireland, but the diverse terrain contains several mountain ranges: the Knockmealdown, the Galtee, the Arra Hills and the Silvermine Mountains. Most of the county is drained by the River Suir; the north-western part by tributaries of the River Shannon; the eastern part by the River Nore; the south-western corner by the Munster Blackwater. The centre of the county is known as ‘The Golden Vale’ – a rich pastoral stretch of land in the Suir basin which extends into counties Limerick and Cork. 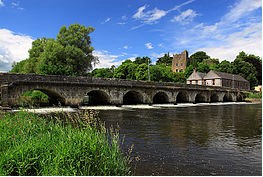 Road transport dominates in County Tipperary. The M7 motorway crosses the north of the county through Roscrea and Nenagh and the M8 motorway bisects the county from north of Two-Mile Borris to the County Limerick border. Both routes are among some of the busiest roads on the island. The Limerick to Waterford N24 crosses the southern half of Tipperary, travelling through its main towns of Tipperary, Bansha, north of Cahir and around Clonmel and Carrick-on-Suir.