10.30am Registration and Tea/Coffee

11.00am Professor Timothy G. Mc Mahon ‘Not Free Merely But Gaelic as Well’: South Ulster, the Diaspora and the Irish Revolution

Timothy G. McMahon is associate professor of history at Marquette University, Milwaukee, Wisconsin. His research includes national identity, imperialism and popular culture in modern Ireland and Britain. Included among his many publications are Grand Opportunity The Gaelic Revival and Irish Society, 1893 – 1910and the memoir Pádraig Ó Fathaigh’s War of Independence: Recollections of a Galway Gaelic Leaguer. He is co-editing a collection of essays Ireland’s Imperial Cultures, 1800 – 1950.

Dr Gerard Mac Atasney from Lurgan, County Armagh has written extensively on the history of County Leitrim, the home county of his mother. In 2004, Seán Mac Diarmada The Mind of the Revolution was the first book to be published about this largely neglected figure of the 1916 rising. Tom Clarke Life, Liberty, Revolution the first biography of Clarke since 1936 was published in 2013. The Dead Buried by the Dyeing The Great Famine in Leitrim is his most recent work

Derry born Frank Galligan with Cavan roots is a radio and TV host, newspaper columnist, poet, short story writer, writing trainer and festival and concert host. He taught creative writing at the University of Ulster and has been a long-time creative writing facilitator. Publications include a collection of short stories Out of The Blue and poetry collections A Strong Weakness and A Cold Forbidding Irish Green. His play Maria Live is a celebration of the life of Maria Edgeworth.

Dr Patricia Craig was born in Belfast, moved to London in the 1960s and returned to live in Northern Ireland in 1999. She has written biographies of Elizabeth Bowen and Brian Moore. Her memoir Asking for Trouble was published in 2007 and A Twisted Root: Ancestral Entanglements in Ireland, in 2012. An acclaimed literary critic and anthologist, she is the editor of many anthologies including The Oxford Book of Ireland, The Ulster Anthology and Penguin Book of British Comic Stories.

Dr Johanne Devlin Trew is a lecturer at the University of Ulster. She held research and teaching posts at Queen’s University Belfast, Memorial University, Newfoundland and Concordia University, Montreal. She has also been a research associate on several joint projects with the Mellon Centre for Migration Studies, Omagh. She is the author of two recent books: Leaving the North: Migration and Memory, Northern Ireland, 1921 – 2011 and Place, Culture and Community: The Irish Heritage of the Ottawa Valley.

Booking – Places are limited so early booking is essential. Please leave your contact details with us if you wish to be placed on a waiting list.

Fees
Fees are non-refundable and must be paid in advance at time of booking. All major cards accepted. 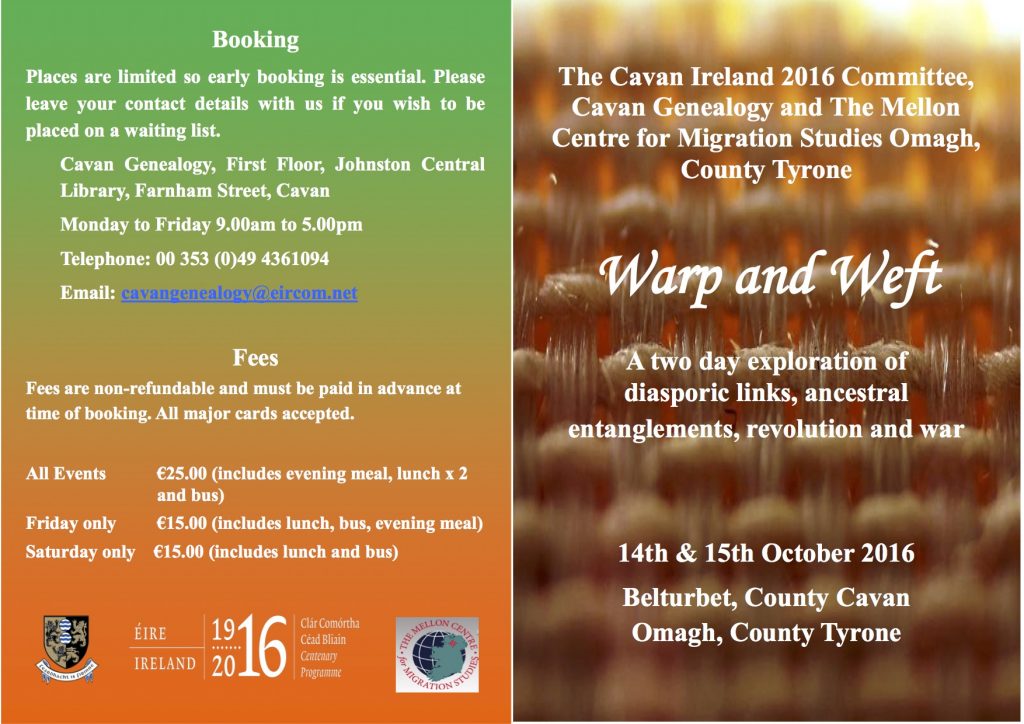