The latest book from James Durney, well-known historian and author, is now available. It tells the story of Co. Kildare and its involvement in the 1916 Rising, providing a chronological account of the days before, during and after the Easter Rising. This study records Co. Kildare’s huge involvement in these momentous events and reveals a story that has not previously been told using many sources available for the first time, along with eyewitnesses’ testimonies.

On Easter Monday 1916 1,600 men, women and children went out to fight for an independent Ireland. They faced the most powerful empire in the world. The battle raged in Dublin for six days and resulted in 485 deaths and the destruction of many parts of the city. While mainly a Dublin affair many of the Volunteers were from outside the city; two dozen Kildare men and women took part in the Rising, including fifteen who walked from Maynooth to the General Post Office. Several Kildare natives and residents were killed on all sides in the Rising, while dozens more were wounded or imprisoned in the aftermath.

The subsequent execution of the leaders of the Rising awakened a generation to the cause of Irish freedom. In the succeeding War of Independence and Civil War the Kildare men of 1916, including Domhnall Ua Buachalla, Tom Harris, Pat Colgan, Michael Smyth and Éamonn Ó Modhráin, would play their part.

This book is aimed at the general reader or anyone interested in the history of Co. Kildare and the 1916 Rising. It is a vital source for teachers, students and researchers who are interested in this period of Irish history.

Foremost and Ready. Kildare and the 1916 Rising will be formally launched on Friday, 20th November 2015 at 7.30 p.m. in the Council Chamber, Naas Town Hall by Cllr. Fiona O’Loughlin, chair of the Co. Kildare Decade of Commemorations Committee. All welcome. 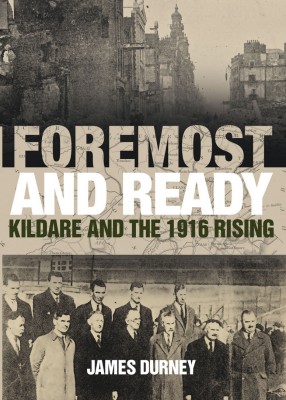 The book is available in all good bookshops.