The Capuchin Annual was published by the Irish Capuchin Franciscans from 1930 until 1977. Although its readership was predominately Irish, its circulation was international as it was frequently sent to Irish emigrants particularly in North America and in Australia. It was a journal unique in Irish publishing containing many literary, historical, photographic, theological, biographical and artistic articles. It claimed a readership of 25,000 worldwide at the height of its success in the 1950s.
Many Irish writers, artists and educators who later rose to prominence such as Benedict Kiely, Pearse Hutchinson, Francis Stuart, Daniel Corkery, Francis MacManus, Richard J. King, Thomas MacGreevey and Augustine Martin received their first opportunities to publish with the Annual.

Throughout its publication run it maintained a very high quality of contributions by leading politicians and writers. The Annual frequently reflected a very strong nationalistic theme. The 1942 and 1966 editions of The Capuchin Annual are particularly well-known as they contained detailed articles, profusely illustrated, on the 1916 Rising. The complete collection of The Capuchin Annual is now being made freely available online solely for scholarly research at www.capuchinfranciscans.ie/capuchin-annual-1930-1977 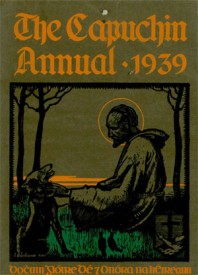